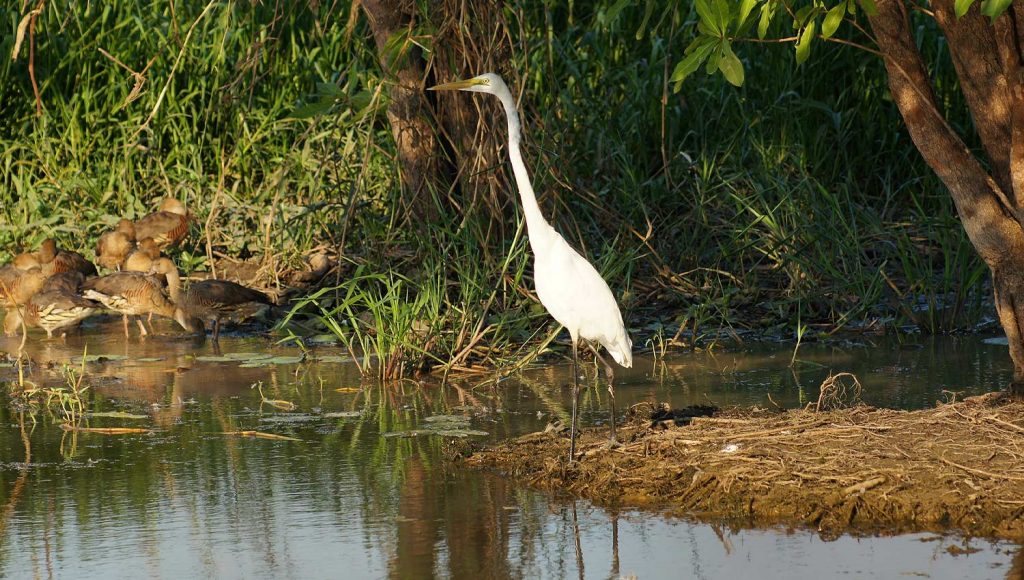 Departing Darwin at 8 am, our day commences with a tour of Darwin and the surrounding region.

We begin with a visit to part of Darwin’s attractive waterfront region and historic Stokes Hill Wharf. Your guide will explain the history of Darwin, including the air raid bombings during World War II, and Cyclone Tracy, which devastated the city in 1974.

Heading out of town, our first stop is Fogg Dam; a vast, open wetland area that is home to large numbers of colourful birds at various times of the year. Fogg Dam was built in 1956 as a central part of an ambitious attempt—mostly funded by American entrepreneurs—to grow rice in Northern Australia. However, after the project failed it has since become a wildlife sanctuary, and it’s now a great place
to see and photograph a spectacular array of local and migratory water birds.

Moving on, we cross the Adelaide River flood plains and head into Leaning Tree Lagoon, a large, natural lagoon that connects with other waterways during the wet season. However, during the dry season it is cut off from these waterways,
and becomes concentrated body of water that attracts an impressive variety of wetland fauna.

This is a fantastic spot for us to stop and enjoy the surrounding environment. We then visit the Corroboree Road House for a brief stop and later, we join a small group scenic cruise around the picturesque Corroboree billabong, viewing a large variety of wetland birds and crocodiles in their natural environment. This area is part of the Mary River Wetlands system.

Our return trip to Darwin takes us along the Marrakai Track, travelling past cattle stations and viewing the mighty cathedral and magnetic termite mounds, which tower over six metres in height!

We arrive back in Darwin around 5.30 pm and return you to your accommodation.

Your guide collects you from your Darwin accommodation at 8AM, in our luxury, fully-equipped, air conditioned 4WD. Arrival back in Darwin is around 5.30PM where all guests will be dropped off at their accommodation.